A new town center at D.C.’s Walter Reed campus will start opening for shoppers and new residents as early as 2022 as construction steams ahead on the massive project.

The Whole Foods Market-anchored mixed-use building in the northern section of the former Army medical center property is on track to open next year, according to Caroline Kenney, managing director of public/private development at Urban Atlantic. The Bethesda developer is working with Hines and Triden Development Group on the 3.1 million-square-foot Parks at Walter Reed project.

Two of the other buildings comprising the town center are also set to deliver next year — one with condos, another with co-living units — and that should start to create a retail and residential “core” for a key section of the development along Georgia Avenue, Kenney said. 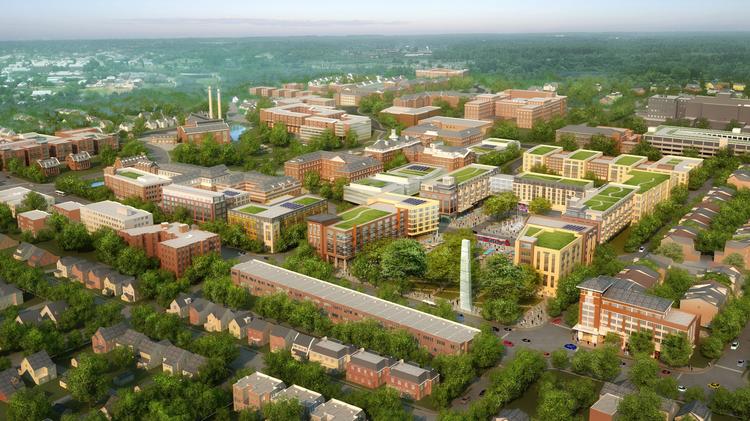 Construction is picking up at the Parks at Walter Reed, despite the pandemic.

When taken together with some of the other construction on the 66-acre site, about 40% of the nearly 2,000 residential units planned for Walter Reed are either finished or under construction, Kenney added. For a project that started to ramp up just months before the pandemic upended the global economy, developers believe the Parks has proven to be quite resilient.

“Our business plan was always to be delivering a steady stream of housing and outdoor space,” Kenney said. “We’re proud we’ve been able to continue that through the challenges of Covid.”

To that end, the development team also expects to open additional outdoor amenities on the property sometime this summer, including a new dog park, a playground and an “arts park,” featuring the adaptive reuse of two historic buildings to provide studio space for artists, Kenney said. Those are all clustered along Aspen Street NW, the southern portion of the development.

And the developers are also advancing plans for a 300-unit building on Georgia Avenue and 50 townhomes on Aspen Street NW. Kenney is particularly excited about the latter portion of the project, considering the “huge demand for townhomes we’re seeing across the entire city.”

The team also recently closed on a complex, $20 million deal to add 54 assisted living units for seniors at the campus. The new units will fill out the remainder of Abrams Hall, a historic building that’s already been adapted to provide affordable homes for veterans and seniors.

This new assisted living units will take up the northern portion of that building, Kenney said, complete with medical nursing stations in rooms and other resources to provide a “high level of care” for people who might not be able to live on their own. The units will be set aside for people over the age of 62 making less than 30% of the area median income, some of the poorest renters in the market.

While most affordable housing deals tend to be convoluted, Kenney said this effort was especially complicated. There were more traditional funding sources, such as investments from a group pursuing federal Low Income Housing Tax Credits and a loan from D.C.’s Housing Production Trust Fund, but Kenney said the team — which also includes affordable developer Housing Up — also had to get creative.

The developers worked with the District to secure some Medicaid funding to make the assisted living services possible. And they’ll work with D.C.’s Department of Human Services and the D.C. Housing Authority to find people to live in these units, prioritizing people who qualify for permanent supportive housing vouchers — often, people who have experienced homelessness.

“It’s not an exaggeration to say we worked with 12 to 15 different District agencies on this,” Kenney said. “The way we see it, if an individual is living in the other portion of building, a senior, needs more help, we would love the opportunity for them to move within the same building. It’s providing a continuum of care within the same building.”

Kenney expects the renovation work on those units to take about a year to complete.

Beyond all the new housing on the site, Kenney said the developers are still courting office tenants for a former hospital building that could be converted into about 280,000 square feet of commercial space — initially envisioned as a mix of office and hotel. She conceded that the pandemic has slowed those efforts, but said there’s still been “ongoing interest.”

“It really is the jewel of the campus,” Kenney said. “And as we deliver the town center, the building becomes that much more attractive to office or residential users.”

The developers hope to have all their construction at Walter Reed delivered by 2025. Elsewhere on the campus, Children’s National Health System is busy adding a research and innovation center on the western portion, while the State Department is also sketching out a plan for new offices on the 50-acre portion it controls.

Read the story on the WBJ site here.