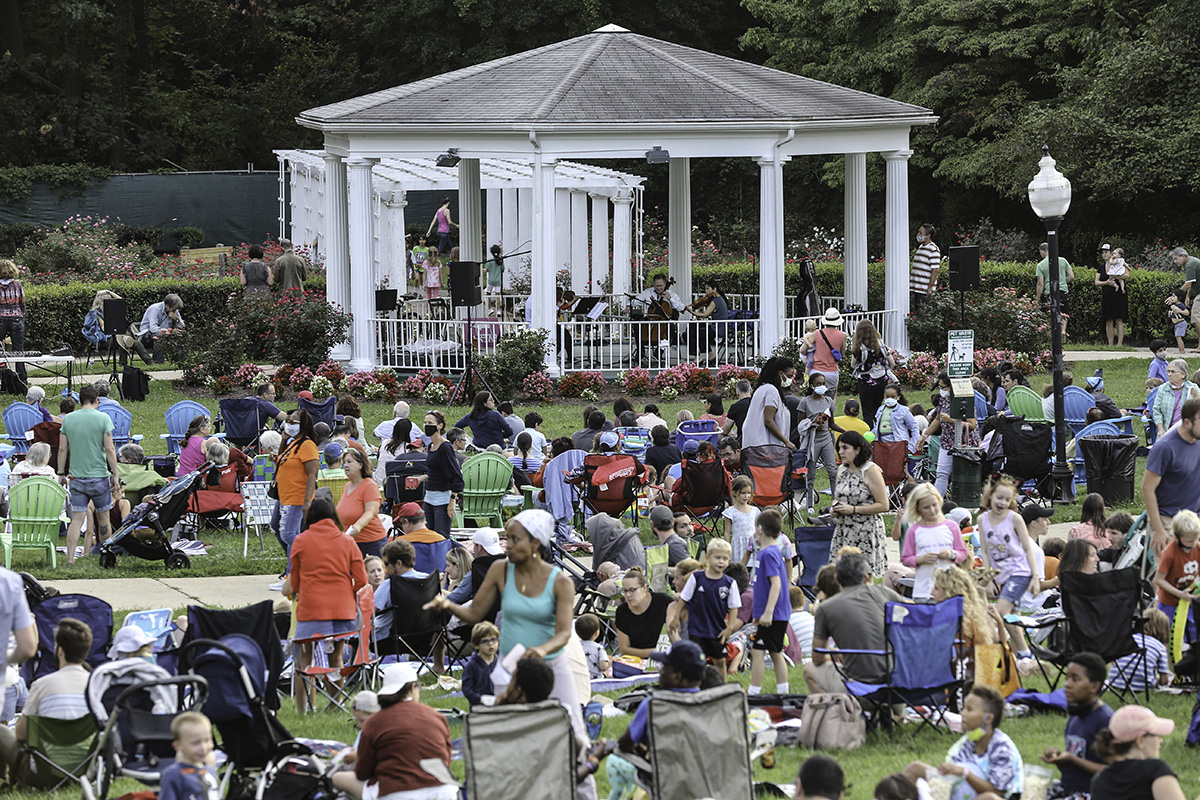 The Parks at Walter Reed is thrilled to welcome the Washington Bach Consort to the Great Lawn for a special string and vocal quartet on Saturday, August 6, 2022 at 6:30 pm. Tenor Patrick Kilbride, cellist Amy Domingues, and violinists Leslie Nero and Risa Browder will present Baroque pieces by Bach, Handel, and Purcell inspired by the setting sun and the sounds of the sea.

After the performance, stick around to watch Movies on the Lawn, showing Goonies. The film starts at dark, around 8:15 pm.

Details: This event is free, open to the public, and accessible to all ages.
Date: Saturday, August 6, 2022
Time: 6:30 pm
Location: The Great Lawn is located at the center of the campus. Enter from 16th Street NW, or enter from Georgia Avenue at Butternut Street NW, and follow Main Drive around to the grassy area. Map 1010 Butternut Street NW
How to Get There: Parking is limited on the site, so walking or biking is recommended. Bike parking is available on racks and signage throughout the site. Some small parking lots are available inside The Parks gate near the playground; and street parking is also available along Georgia Avenue and Butternut Street NW. Native Washingtonian Leslie Nero was professionally active for 15 years in Ontario and Quebec, Canada, playing in several orchestras. Upon returning to the Washington metropolitan area, she began playing as a freelance violinist and violist with both modern and baroque ensembles. She often performs with Arcovoce, Opera Lafayette, Modern Musick, the Folger Consort, and the Washington Bach Consort. She also enjoys teaching violin to many eager fourth and fifth grade students in the Alexandria City Public Schools. Her violin is by Jason Viseltear and the bow is a 17th century model by Steve Marvin.

Risa Browder, violinist and violist, whose playing The Washington Post has called “flavorful and expressive,” grew up in Princeton, New Jersey. Asked at age three if she would like to learn the violin, she answered her parents with an emphatic, “Yes!” She’s been playing ever since, nowadays focusing on historically-informed performance on violin, viola, viola d’amore, and occasionally treble and tenor viols. She trained at Oberlin Conservatory (Ohio), the Royal College of Music (London, UK), and the Schola Cantorum (Basel, Switzerland), studying with some of the great pioneers of the HIPP movement: Marilyn McDonald, Catherine Mackintosh, and Jaap Schroeder. Having completed her studies, she began her musical career in Europe playing and recording with groups like the Academy of Ancient Music, the English Concert, and les Musiciens du Louvre, among others. Now living in the Washington, DC area, she co-directs Modern Musick, in residence at Georgetown University, with whom she has performed a wide range of repertoire from the early Baroque to Classical, including the music of Corelli, Handel, Vivaldi, Bach, Haydn, Mozart, and Beethoven. She appears regularly as soloist and concertmaster with the Folger Consort, as principal viola with the Washington Bach Consort, with the National Cathedral Baroque Orchestra, and as a guest artist with REBEL. At the Peabody Conservatory Risa teaches Baroque violin and viola, and with her husband cellist John Moran co-directs the Baltimore Baroque Band, Peabody’s acclaimed Baroque orchestra. Their work with this group garnered them Early Music America’s Thomas Binkley Award in 2018. Amy Domingues performs on the cello and viola da gamba. Ms. Domingues honed her ensemble skills early in her career as a session cellist, recording and touring with rock and experimental bands in the USA, Europe, and Japan. Later, armed with an ever-present interest in music history, Amy turned her focus to the viola da gamba. Following several years of study, including masterclasses with Wieland Kuijken, Paolo Pandolfo, and Philippe Pierlot, she earned a master’s degree in Early Music from Peabody Conservatory. Amy has enjoyed an ambitious career as a historically informed musician, performing on baroque cello and viola da gamba with groups as varied as The Folger Consort, Hesperus, and the Washington Bach Consort. Amy is a founding member of Sonnambula (Ensemble in Residence at the Metropolitan Museum of Art 2018-2019), and co-founder of Corda Nova Baroque. She is an avid educator and maintains a private studio of cello and gamba students. Ms. Domingues has served as faculty at the Madison Early Music Festival, the Conclave of the Viola da Gamba Society, and appears on over 70 albums, most recently Sonnambula’s world premiere of Leonora Duarte’s Sinfonias (Centaur Records 2019). She resides in Washington, DC.

About the Washington Bach Consort

Founded in 1977 by Dr. J. Reilly Lewis, now led by Artistic Director, Dr. Dana Marsh, the Washington Bach Consort shares the transformative power of music, with the works of J.S. Bach and other Baroque composers at the core. Our professional artists inspire audiences with the highest levels of artistic excellence, enrich the cultural life through historically-informed performances, and provide educational programs in the Washington, DC community and beyond.